Not much happened yesterday. And yet everything crucial did.

Yesterday's price action was almost meaningless if one looks at it without any context, and without prior investigation of the technical picture of gold, silver, mining stocks, and the USD Index. At the same time, however, it was a profound cherry on the analytical cake. It was like the first tiny lightning after the storm had been brewing for hours.

The final high had likely been put in on Tuesday, when the GDX topped almost exactly at our profit-take level of $27.88. Yesterday's small move higher was likely the final goodbye kiss to the $28 level in GDX, $1,490 in gold, and silver above $17. The white metal closed the day slightly above $17, but it's already below $17 in today's pre-market trading.

Why was yesterday's session so significant? For several reasons. We already laid the short-term analytical foundation yesterday, therefore we won't go over the situation in mining stocks again today, but the fact that theymoved exactly to their targetis already a bearish factor.

The big deal that is likely going below traders' radars is what happened in the USD Index, and - most importantly - how gold and silver reacted to it. 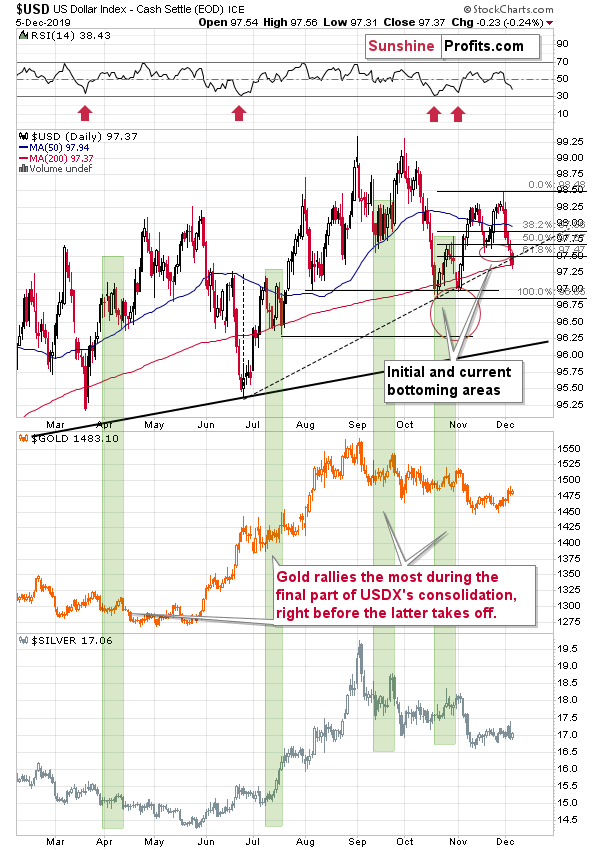 The USDX declined once again and it's very close to its short-term support level - at about 97.20 (inyesterday's analysiswe explained why 97.20 is significant). Yesterday's low was 97.31 - just 0.11 above it.

This might mean that the USD Index low is already in, especially since yesterday's decline was a small breakdown below the rising dashed support line. The previous attempt to break lower was immediately followed by a strong rally. That rally corresponded with a sizable short-term decline in gold.

At the moment of writing these words, the USD Index already moved a bit higher today, which means that we might see an invalidation of the above-mentioned breakdown very soon.

USD's outlook is one thing, but the way gold and silver reacted to USD's decline and a move to the new monthly low is something different. And even more important.

The prices of gold and silver didn't move to new highs. In fact, silver was barely affected by yesterday's decline in the USDX. This is a subtle, yet very important confirmation of multiple factors that we've been describing inprevious days. After all, it happened right after the double triangle-vertex-based reversal, which was already a reason good enough for the metals to form a top.

The Miners in the Meantime 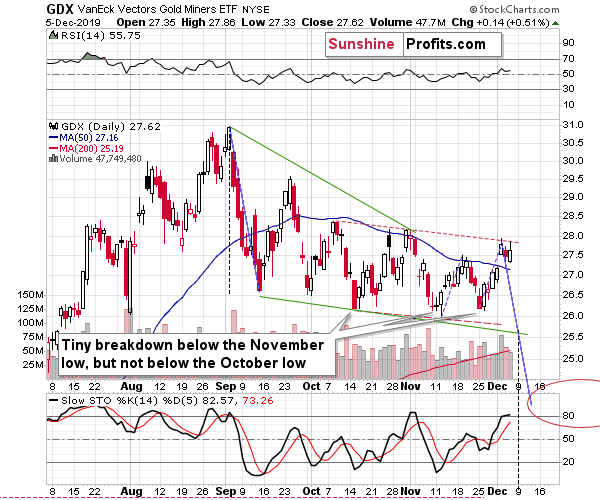 Mining stocks didn't move much higher either. After the initial test of the previous highs, they erased some of the gains and ended the day only 14 cents higher.

Before moving to gold, let's take look at its proxy, the GLD ETF. It's showing something specific that the regular gold chart doesn't. 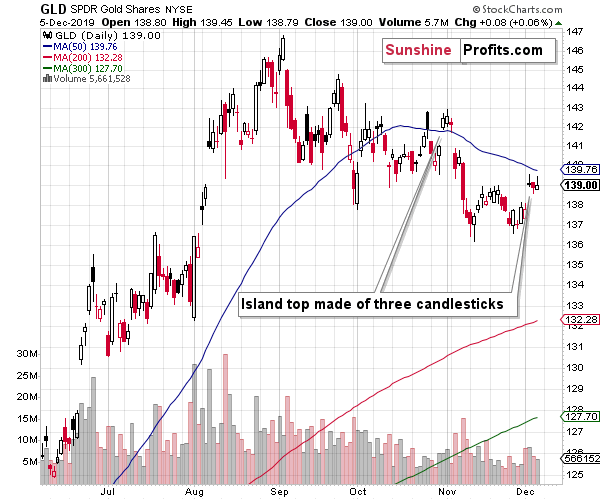 The GLD chart is based on the stock market session, so it covers only a certain part of the time that gold futures chart cover. But at times, this can actually be a good thing. It can make the comparisons between similar situations easier. For instance, right now.

Looking at the above chart makes it clear that the last three trading days are actually an island top - something that happens after a price gap and is formed when the price doesn't then do much for a few days. The decline that follows is quite often similar to the one that precedes the top - at least initially.

That's exactly what happened last month. The November decline started with a price gap that was almost exactly the same as the price gap that preceded the top. The implication is that gold could slide shortly, perhaps later today.

And how low could gold slide in the near term? 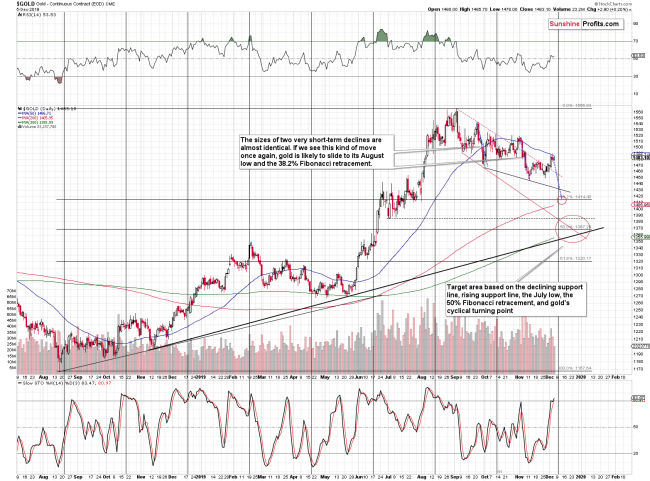 This level is additionally supported by the 38.2% Fibonacci retracement based on the 2018 - 2019 rally, and the August low. Moreover, given the pace at which gold declined previously and the proximity of the next cyclical turning point for gold (the middle of next week), gold may not have time to decline more before correcting.

The lower target area is bigger and stronger. It is based on the rising medium-term support line, the declining support line (red), the 50% Fibonacci retracement, and the July low. Most importantly, it's supported by the long-term gold chart. 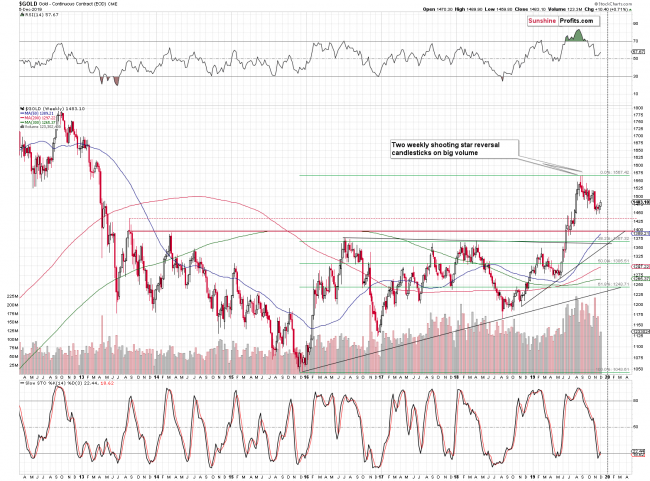 The rising medium-term support line that we already mentioned above crosses with the support line that's based on the 2016 and 2018 highs, which makes the $1,360 (approximately) support particularly strong. Moreover, let's keep in mind that since these two major lines are crossing, we're likely to see a reversal at that time.

Interestingly, this triangle-vertex-based reversal corresponds to the reversal from the previous short-term gold chart. This means that both reversals confirm each other and that they are even stronger as a result. In other words, gold is very likely to form a reversal close to the end of the year. 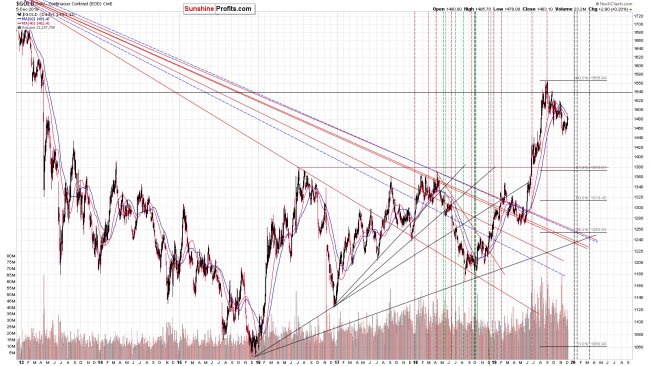 This means that the odds for a major reversal at the end of the year increase even further.

Summed up, what does it all mean?That gold could decline shortly, correct a bit after reaching the proximity of $1,415, then decline once again until - approximately - the end of the year. Then correct once again - perhaps more visibly - and then gold's decline would likely continue.

Our profitable long precious metals position has been closed a while ago, and we've entered another trade immediately. This time, on the short side of the market, and it's going profitable again. The full version of this analysis features the full details and targets of the already-profitable short.Join us and profit along!

All essays, research and information found above represent analyses and opinions of Przemyslaw Radomski, CFA and Sunshine Profits' associates only. As such, it may prove wrong and be a subject to change without notice. Opinions and analyses were based on data available to authors of respective essays at the time of writing. Although the information provided above is based on careful research and sources that are believed to be accurate, Przemyslaw Radomski, CFA and his associates do not guarantee the accuracy or thoroughness of the data or information reported. The opinions published above are neither an offer nor a recommendation to purchase or sell any securities. Mr. Radomski is not a Registered Securities Advisor. By reading Przemyslaw Radomski's, CFA reports you fully agree that he will not be held responsible or liable for any decisions you make regarding any information provided in these reports. Investing, trading and speculation in any financial markets may involve high risk of loss. Przemyslaw Radomski, CFA, Sunshine Profits' employees and affiliates as well as members of their families may have a short or long position in any securities, including those mentioned in any of the reports or essays, and may make additional purchases and/or sales of those securities without notice.