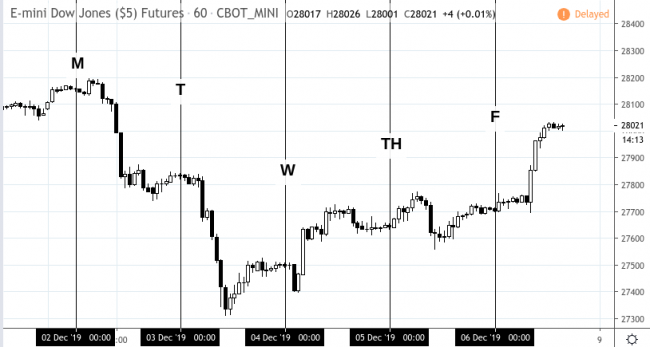 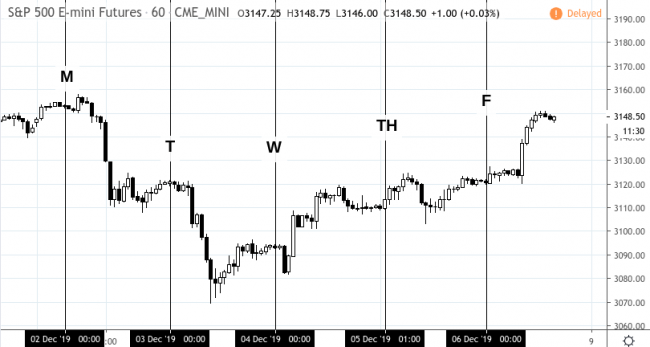 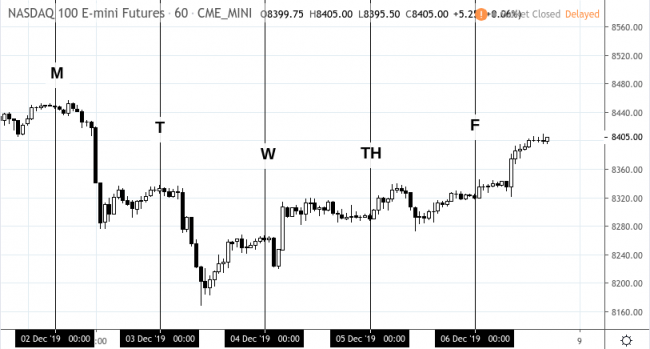 Today saw a steep drop across all three major US indexes as trade news coupled with unfavorable manufacturing report dampened the optimism that fueled the broader market to new heights in November.

It remains unclear as to when a phase one US-China trade deal might take place, particularly after President Trump had signed legislation in support of the Hong Kong protests. If a trade deal doesnt take place before December 15, the possibility of additional US tariffs on Chinese goods may move ahead as scheduled.

In addition to tariffs on China, President Trump also tweeted: Brazil and Argentina have been presiding over a massive devaluation of their currencies. which is not good for our farmers. Therefore, effective immediately, I will restore the Tariffs on all Steel & Aluminum that is shipped into the U.S. from those countries.

Topping off doubts in the current trade environment, the ISM Manufacturing PMI came in at 48.1, showing us that manufacturing activity continued to contract last month. The ISM PMI figure is well below economist expectations of 49.4, and stocks seemed to have hit their lows upon the reports release.

The question now is whether the data contain fundamental indications that may outweigh the factors that brought indexes to dazzling new heights last month, or whether this turn merely signals another short-term corrective phase.

Stocks are on a three-day losing streak after President Trump said he might wait until after the 2020 presidential election before striking a trade deal with China.

He said earlier today, I like the idea of waiting until after the election for the China deal, stating further that he has no deadline and that it is better to wait.

Despite the markets recent negative performance, following a month of blistering gains, President Trump said that the decline is minor when compared to its cumulative performance since he took office.

The now elusive phase one trade deal has been at the center of market sentiment and the overall headline volatility that has fueled the markets rise positive and negative fluctuations. As the US and China have implemented an escalating series of tariffs--the next round of tariffs on Chinese goods scheduled for December 15--markets have been looking forward to a phase one trade deal to help resolve at least this segment of economic and geopolitical uncertainty.

Not surprisingly, the broader market rebounded after its three-day slide on news that a US-China phase one trade deal is once again(drum roll please)...close to happening. The market response off these headlines have become at this point has become near-predictable. So much so that Neil Dwane of Allianz Global Investors in a CNBC report described investor sentiment has having a Pavlovian response (yes, he essentially equated the investing public to Pavlovs dog...can you blame him?).

One trade-related item that might have tempered the markets Pavlovian optimism was France and the EUs threat to retaliate should the US impose tariffs on French imports. This announcement came in response to a potential tariff list on French goods revealed Monday by a US trade official. That list, in turn, was in response to a new digital service tax which, according to Washington, places US tech companies in an unfavorable and less equitable position.

In other economic news, the ADP employment report showed that private payrolls increased last month by 67,000, well below the 150,000 estimate.

It was a choppy day of trading for the broader stock market, and the day ended with few changes to show for it. Lets call it a day of pause. Todays main market drivers were arguably yesterdays new on the US-China trade front and todays unemployment report.

To recap what had happened recently on the trade front, markets slid on Tuesday after Trump said that the US can wait until after the 2020 election to strike a trade deal. Apparently, investors didnt like that comment. On the following day, a Bloomberg report said that both countries were, once again, getting close to an agreement, and that separately, President Trump mentioned that trade talks were moving forward very well. As you might guess, markets rallied.

Bear in mind that both countries have 10 days to reach a deal before additional tariffs on Chinese goods are to be levied. The coming round would impose tariffs on up to $156 billion worth in Chinese goods.

The second of todays market drivers--the unemployment report--came in relatively favorably with jobless claims declining by 10,000 to 203,000 in the last week of November. This beat estimates of 215,000. With the unemployment rate at 3.6%--meaning its still at a 50-year low--it shows that despite the slight slowing in US economic growth, companies dont want to lay off its workers. This factor is arguably significant, as the low unemployment rate has played a critical role in driving the current economic expansion.

The broader stock market mounted an impressive surge on top of a better-than-expected jobs report that topped analyst expectations.

266,000 jobs were added in November, far above the 187,000 that economists had predicted. The unemployment rate, falling to 3.5%, remains at a 50-year low. In addition to this, the labor department also revised its September and October job figures upward--from 180,000 to 193,000 in September, and from 128,000 to 156,000 in October. Todays data alongside past months revisions affirmed strength in this particular segment of the US economy.

So what implications might these stellar figures have on the ongoing US-China trade talks? According to MarketWatch, some market experts believe it plays to the advantage of US negotiators--that it can embolden U.S. trade negotiators in a protracted tariff dispute between the U.S. and Chinapossibly resulting in a delay if not outright scuttling of a long-sought-after resolution.

Even CNBCs Cramer said that The president can walk away from the table with this number, casting a different light on President Trumps statement last week in which he said the US is in no rush to sign a deal by years end.