Grain prices firmed in the overnight session that spilled into the morning trade. This push sent corn and wheat slightly higher, while beans rallied 10 cents. However gains were again short lived as corn and wheat went negative and stayed that until going unchanged at the close. Beans finished the day up 5.4 cents and up 13 cents for the week. Overnight China announced that retaliatory tariffs will be suspended on previous shipments of US pork and soybeans. This in my view was a main cause of the night session/early morning rally. However until a deal is inked, the trade remains suspect as this latest olive branch by the Chinese means little. The bulls need a catalyst near term to trade higher namely wheat and corn. This Tuesday's 11 AM central crop report is simply a supply/demand estimate report with nothing updated on final US production. The first look on final US production wont come until the January report. One market that has sustained, where a bull story may emerge is soy oil. Palm oil futures on the Bursa Malaysia rallied Friday on supply concerns and solid demand, overtaking US soy oil futures trading on the Chicago Board of Trade for the first time since 2011. The benchmark palm oil contract for February delivery jumped 1.5% during the Friday session to close the week at MYR2,858/mt ($685.37/mt) its highest level since September 15, 2017 and up 33% since the start of October. 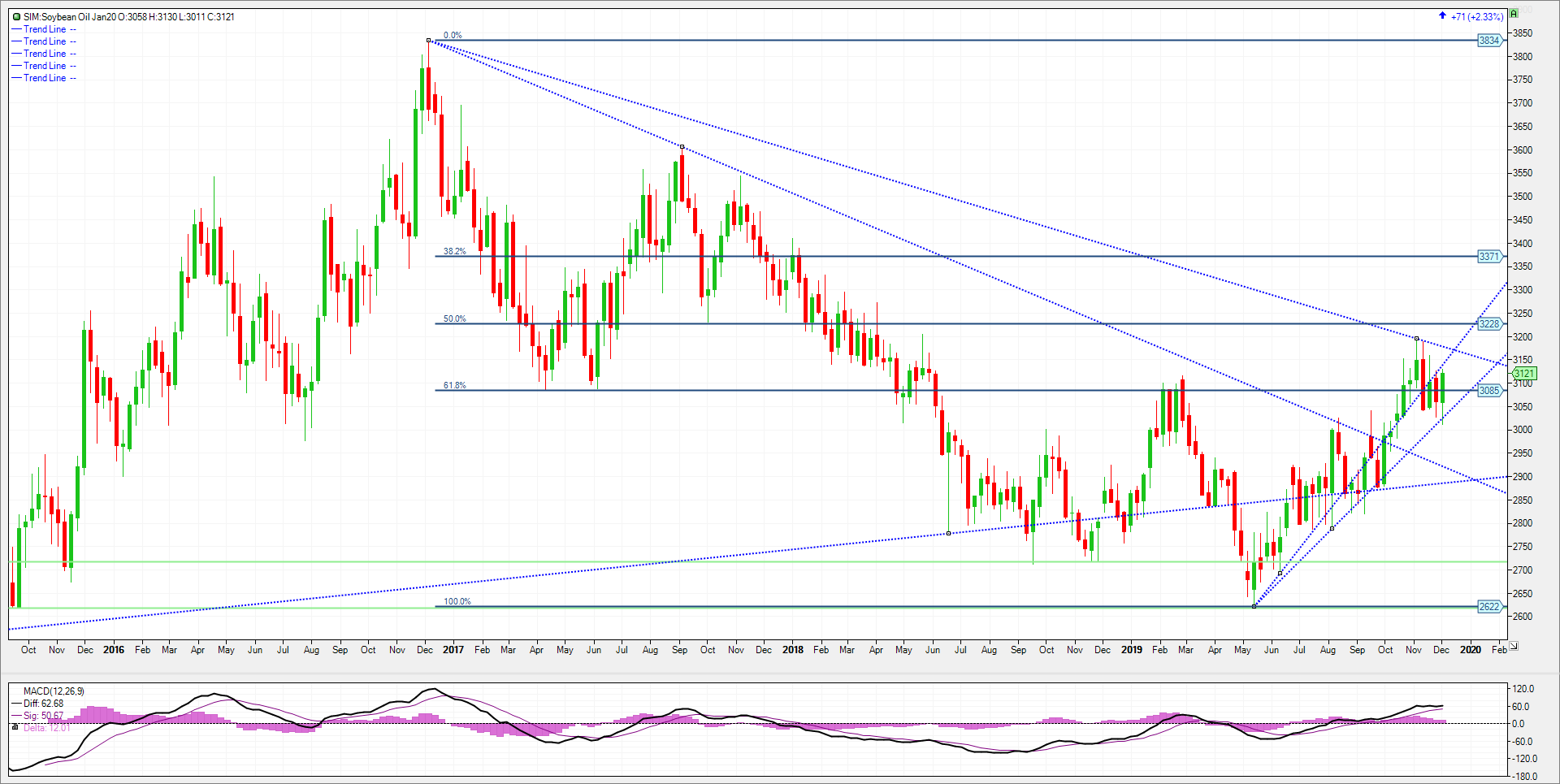 The production growth in major producers Indonesia and Malaysia has stalled after dry weather this year limited yields, while both governments have extended their bio diesel mandates from the start of next year, forcing traders to scramble to cover shorts in my opinion.Yet at the same time, soy-oil futures which generally trade at a premium to the tropical oil did not rally to the same extent as uncertainty around the ongoing US-China trade war have kept the contract in check in my view. If the rally continues we could retest multi year highs up at the 35.00 level quickly in my opinion. A trade to consider would be to sell a put spread which would have defined risk and use the credit to buy an outright call. What I'm thinking is this. Sell the March Bean Oil 34.00/32.00 put spread. The max loss on this spread is 200 points or $1200.00 plus commissions and fees per spread. We would like to sell this spread at 1.60 or collect $960 minus commissions and fees. Therefore our risk at expiration would be 40 points or 240 per spread. We could then use the collection to buy a March soy oil 33.00 call for 50 points or 300 cost. In this equation it increases our risk to $540.00 plus all commissions and fees. The goal of the trade is to collect cash upon entry and then if the market rallies past 33.00 up to 35.00, take profits on the long call and hopefully buy back the short put spread for as little as possible. Take cash on the way in and way out. A static long using options instead of getting potentially whip-sawed in the futures given all the noise in the market about trade maybe a better strategy.

Please join me each and every Thursday for a free grain and livestock webinar at 3 pm Central. We discuss supply, demand, weather, and the charts along with trade ideas both speculative and hedge. Sign Up Now